Want to hear what teenagers from London are telling us about the riots in their own words? Here’s a selection of quotes gathered over the last few weeks.

‘Everyone knows what happens on the streets these days. People getting stabbed up, people getting robbed, people getting their house burgled. Bare stuff’s going on right now, bare stuff, its crazy bare’.
(Anon, Wood Green, North London)

‘When [the youth clubs] did close [the council] didn’t even let the young people know. It’s like, one day it was there and the next it was gone.
(Liz Chavez, London) 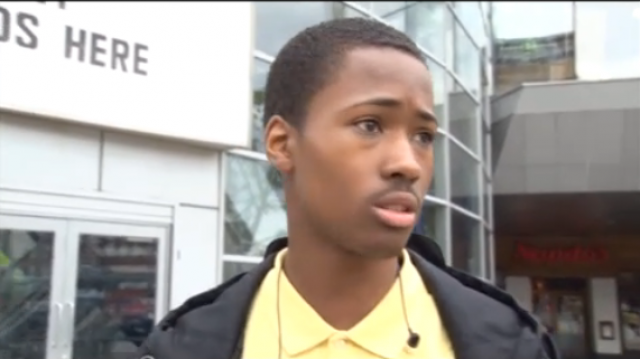 ‘Postcode rules – if another person comes to their postcode, or they see other people in these areas that they believe shouldn’t be there, they want to ask them why they’re here and they might want to fight theme… Some gang members do go to the youth club and they are off the streets but it’s not a whole day thing so obviously there will be times when it shuts and they will be free to roam the streets I suppose. There’ll always be that. A lot of people they don’t have much money and some of them come from poorer backgrounds so they look to have cause trouble, have fun, maybe take stuff of other people cause they haven’t got things themselves. There’s always gonna be trouble makers but it’s keeping that number as low as it can be.’
(Eldred Taylor-Camara, London)

‘I’d say I’ve had a couple friends that’ve been stabbed and one that’s been shot. Not severely thank god… knife crime, you get a lot of gun crime, a lot of stuff like that over nothing major. ’
(Zephaniah Thompson, London)

‘If your in a gang you’ve got that security around you. Like, you’ve got your friends around you to protect you, to back you up. As more gangs turn up it becomes more dangerous for people who aren’t in gangs.’
(David Asante, London) 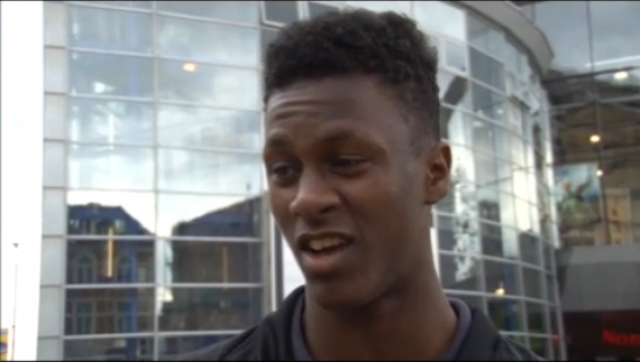 ‘The streets in London are rough, you got a lot of knife crime and all that… When you shut down youth centers it cuts kids roots off, their links so they don’t really have anywhere to go… [When school holiday’s start] I think it’s gonna be swarmin’, I think people are gonna be trying to find stuff to do, people are gonna want to get jobs and that’s gonna be tough. You know there’s gonna be riots, there will be riots, they’ll be riots. ’
(Chavez Campbell, London) 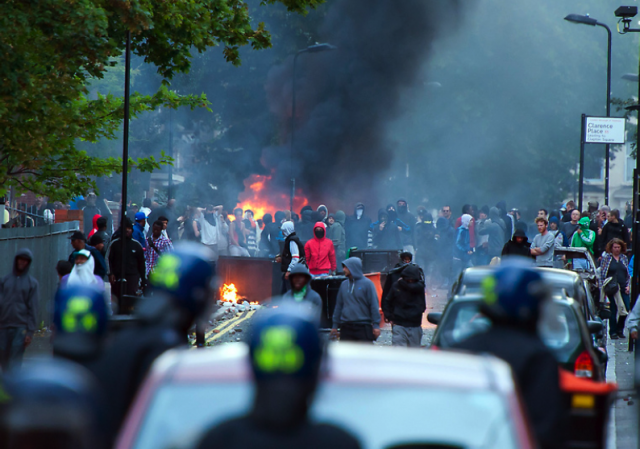 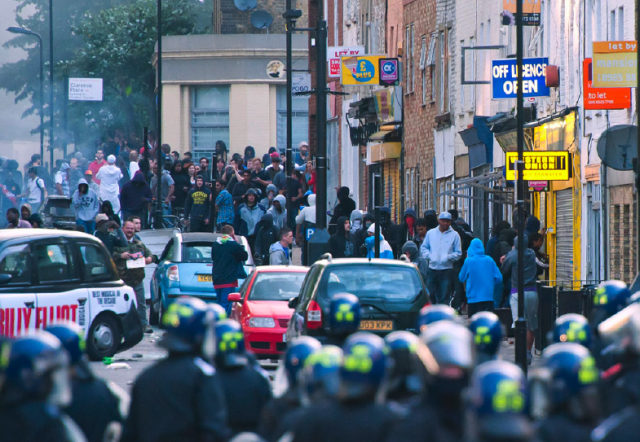 Groups gather in London. (Images: The Denver Post and Alan Taylor at The Atlantic) 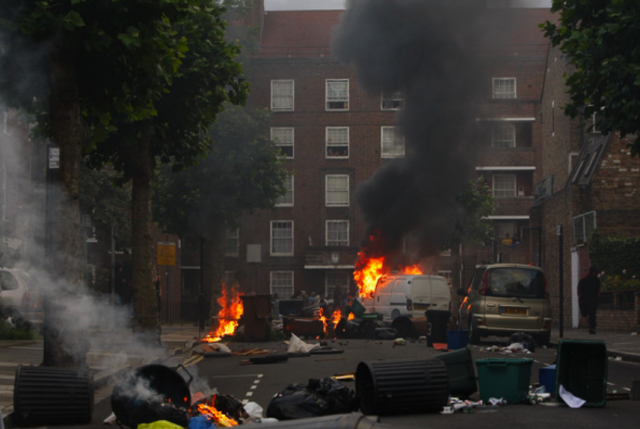 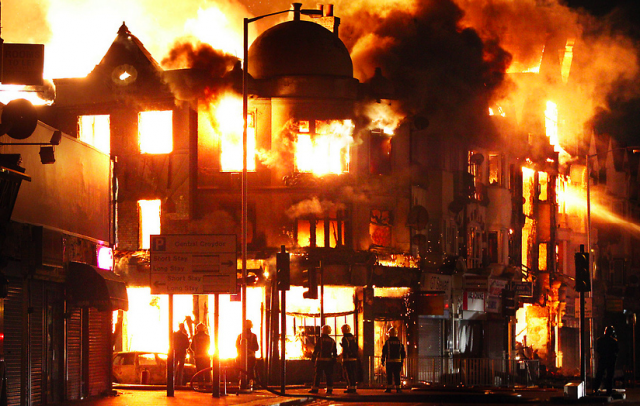 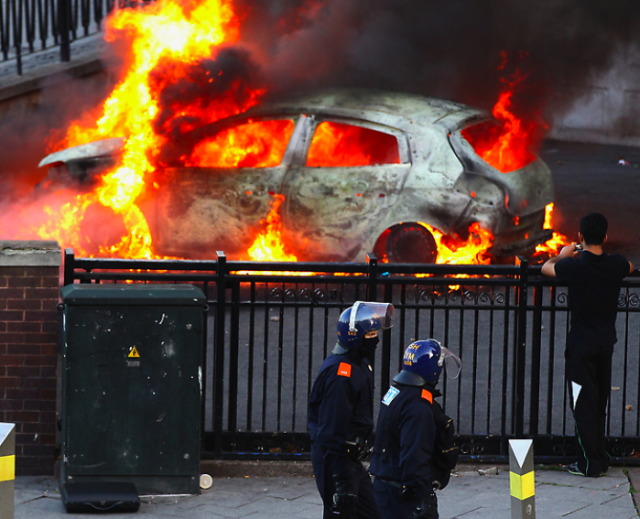 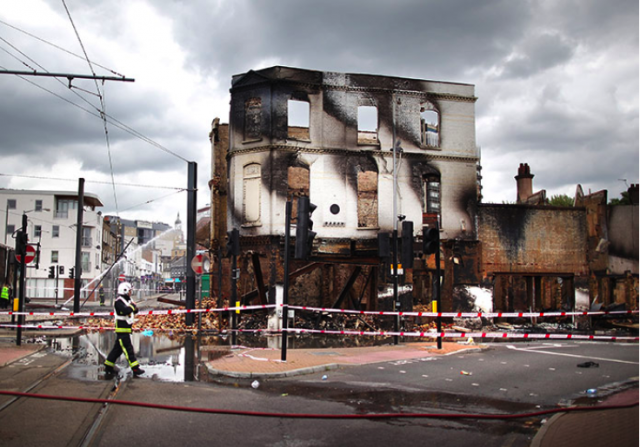 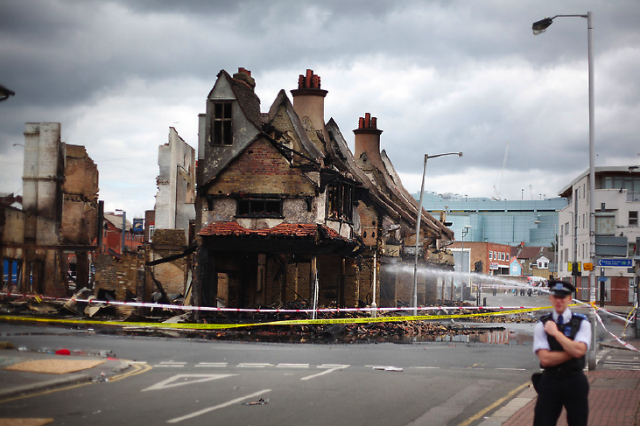 Scorched Buildings, London. (Images: The Guardian and The Denver Post)

‘London’s Riots! wow my city’s gone mad! You can’t blame them though teenagers in London are just FED UP!’
(Sabrina-Ann, 16. London. via twitter)

People—young and old—helped with the clean up. It continued throughout rioting period and attracted a diverse section of the community. The boys in this picture are quoted as saying:
‘Some [people helping clean up] live on council estates, some in expensive areas, but they were all here making new friends and looking to the future’.

Images from three of the major newspapers in the UK. The front cover picture they all used has become one of the defining images of the 2011 riots. 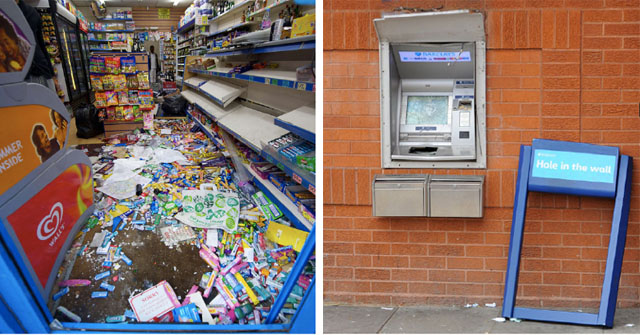 Damage to a shop in Croydon and damaged cash machine Birmingham (Images: The Telegraph)

SynGatesLover, London and her thirteen-year-old sister give their opinion of what happened in London via you their YouTube channel. She even sings a tribute song!
httpv://www.youtube.com/watch?v=9gM58XmFKeY&feature=related

‘Spread the word now, everyone going to oxford circus tonight for a riot at 8pm, meet at JD’
Text message received by 16 year old in Brixton. (via Reuters)

Crowds and police from above, London. (Images: danielfinbar, flickr)

‘WHOAH … been out the loop all day, to all the people of the UK I hope you are ok my prayers go out to you and the amazing people there’
(Justin Bieber, via Twitter)

The reaction of a young man in Tottenham when he was asked if rioting really achieved anything (via Al Jazeera) :

‘Yes …You wouldn’t be talking to me now if we didn’t riot, would you? Two months ago we marched to Scotland Yard, more than 2,000 of us, all blacks, and it was peaceful and calm and you know what? Not a word in the press. Last night, a bit of rioting and looting and look around you [the reporter and the young man are surrounded by reporters, cameras, and journalists all trying to get a story]’
(Anon, London) 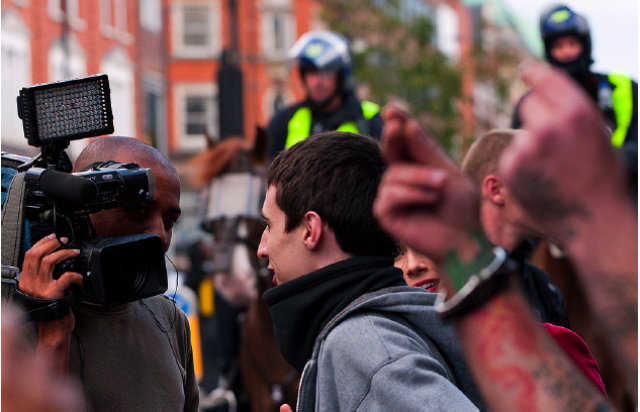 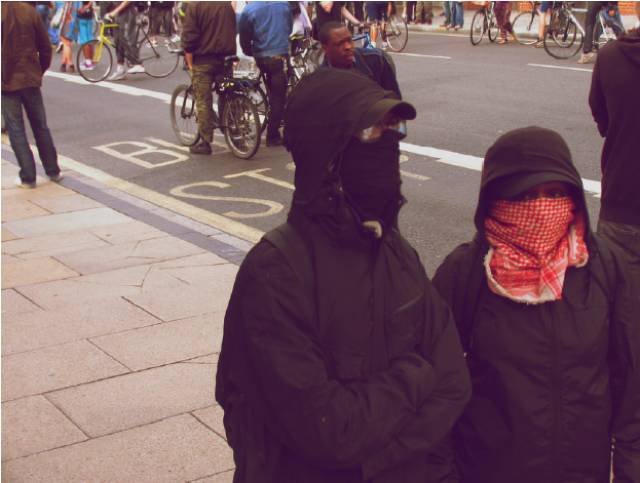 Rioters in Hackney being interviewed.

Reporter: ‘Can I ask you first how old you are?’
Young Man 1: ‘I’m fifteen.’
Young man 2: ‘And I’m seventeen.’
Reporter: ‘Why are you in the city centre after you’ve been told not to come out?’
Young Man: ‘We’ve been out for the day in Blackpool, we got the train to Deansgate
and as soon as we came out of the train we heard chanting init. And we seen everyone runnin’ up the streets like, and we got stuck right in the middle of it. We got stuck.’
Reporter: ‘But why don’t you go home, why are you still here?’
Young Man: ‘Cause everywhere we try and go the police push us away and tell us to go back.’
– – –
Young Man 3: ‘To piss the police off.’
Reporter: ‘Why do you want to anger the police?’
Young Man 3: ‘You don’t know what the police are like bro, I just can’t, I can’t explain it.’
Reporter: ‘Can you try? What’s made you angry?’
Young Man 3: ‘I come out for money and to anger the police. This is our pay back cause they can’t do nothin’ to us today. The police can’t do nothin’. It’s a right to freedom act, do what you like today mate.’ 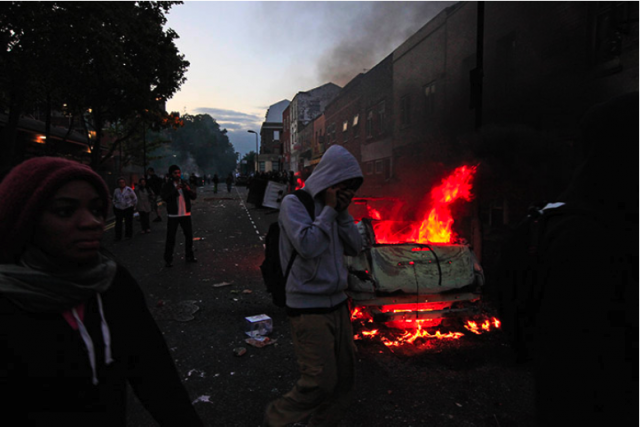 Youths walk past a burning car in London (Image: The Guardian)

Young supporters of the riots explain why they back the looting in Croydon, London:

‘No one’s got no money around here so everyone’s trying to make as much as they can while they can. Obviously [people who say we’re thieves] have got a lot easier lives than other people around here—some people have got absolutely nothing. [The destruction] is just consequences that happen when everyone teams together. It’s a very hostile area around here so as soon as everyone starts feeling that atmosphere, it’s kicking off, everyone wanted a bit of everyone. I don’t think that’s justified but everyone around here is animals you know what I mean? This ain’t the end of it, I reckon it’s going to go on for at least another week, people now see the police can’t control us and it’s just going to carry on and on.’

Click to listen to audio recording of the above interview. 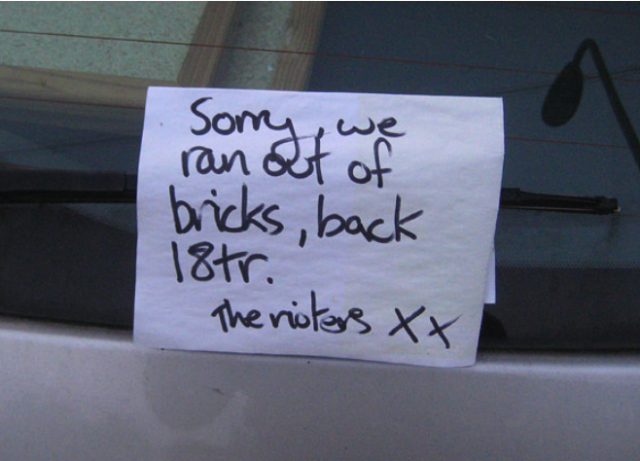 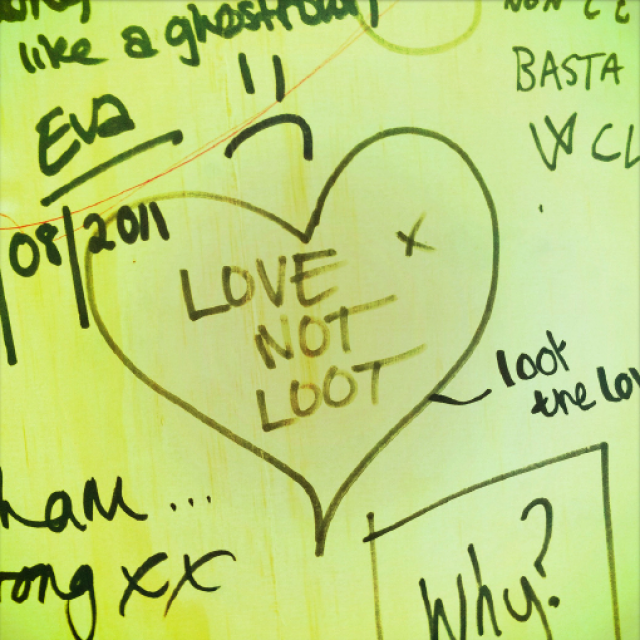 Note left by London rioters and another by residents of Peckham. (Images: The Telegraph and Flickr)

‘We are fed up, obviously. We get searched and pulled over for nothing; it’s our kind of way of rebelling. It’s not an excuse but that’s what we know, we’re broke, we wake up and this is our way to get a bit of money. Obviously other people, stuck-up people, don’t see it our way.’ 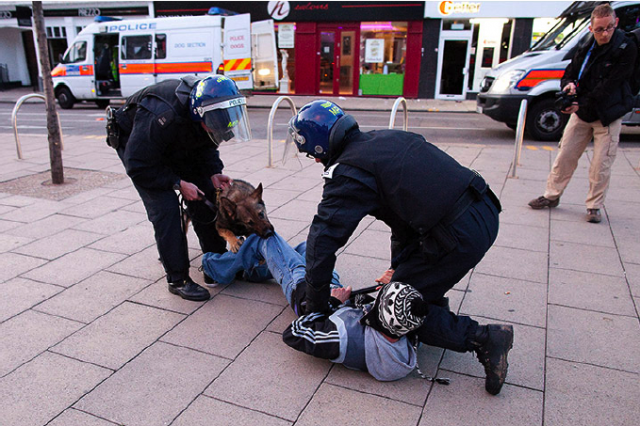 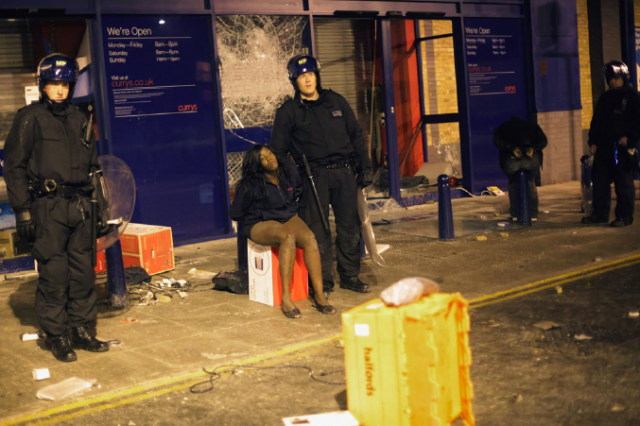 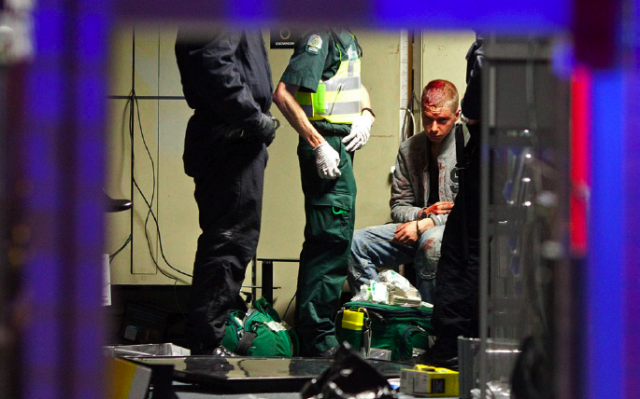 Teenagers in Manchester responding to a reporters asking: ‘Why have you been
stealing all this stuff?’

Youth 1: ‘Why would you pass up the opportunity to get some free stuff that’s worth, like, loads of money? …Anyway its not about that, its about the government, loads of kids don’t go to college no more cause they don’t get paid init. I’m not really bothered, ill keep doing this everyday until I get caught… Nothin’s gonna happen to me, I might get grounded or shouted at but I’ll live with that. And what’re they [the police] gonna do to me, the prisons are overcrowded anyway. What they gonna do, give me an ASBO [Anti Social Behavioural Order]?!’

Youth 2: ‘I seen kids here today younger than me, little girls younger than me runnin’ in shops and that, and obviously that’s wrong cause little kids shouldn’t be doing it like …I mean, its not right for anyone to be doin it …I’m just doin it cause everyone else is doin’ it’

Youth 3: ‘I’ve come for the money… The police nick you for stupid things. This is our payback. They can’t do nothing to us today.’

Youth 4: ‘People are just taking out their anger (with the authorities). It is wrong but they’re just trying to make money because they can’t get to college and they just think ‘Why not make quick money?” 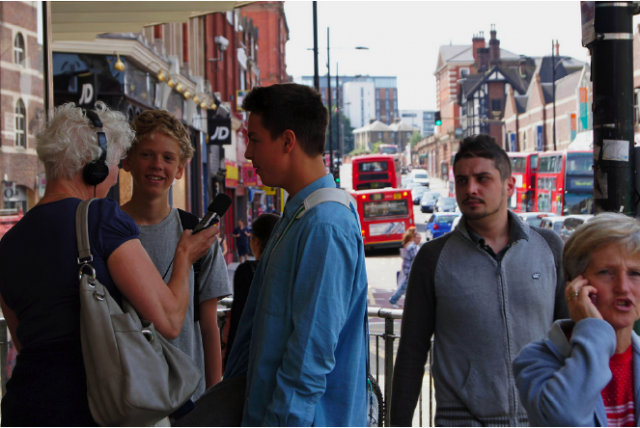 Young men being interviewed in the streets of London. 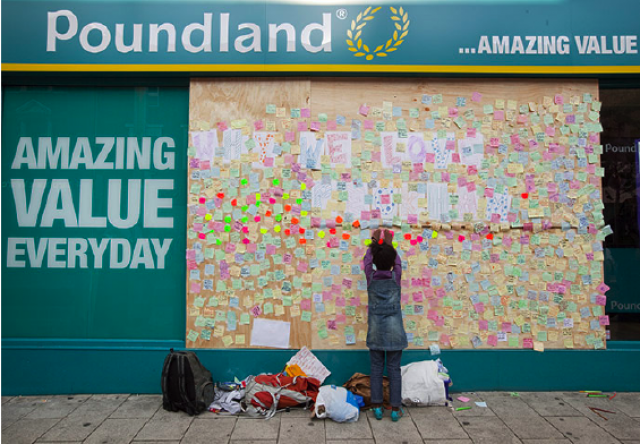 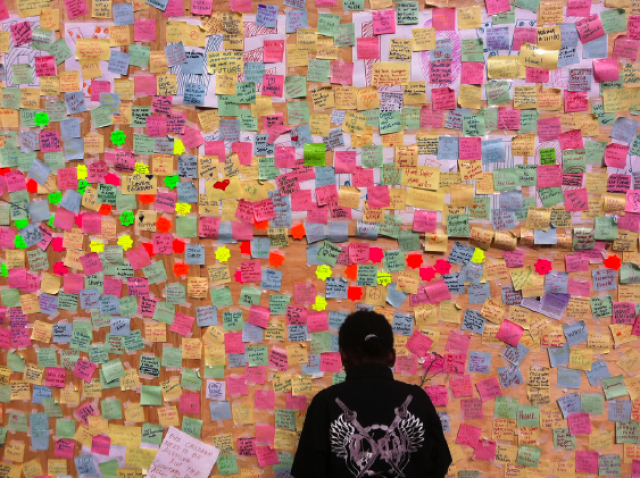 A post-it message board set up by local theatre company in Peckham. It asks residents why they love Peckham (Image: The Guardian) 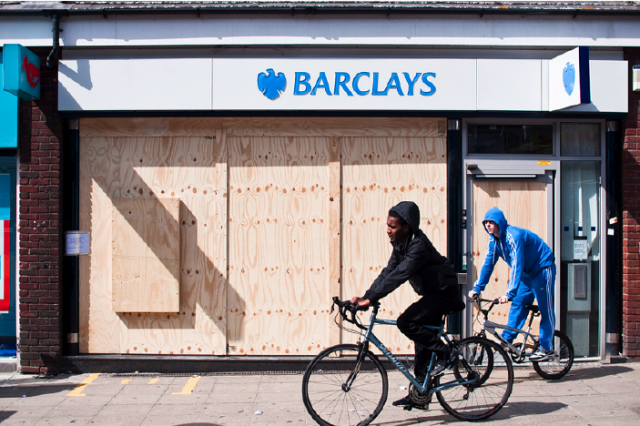 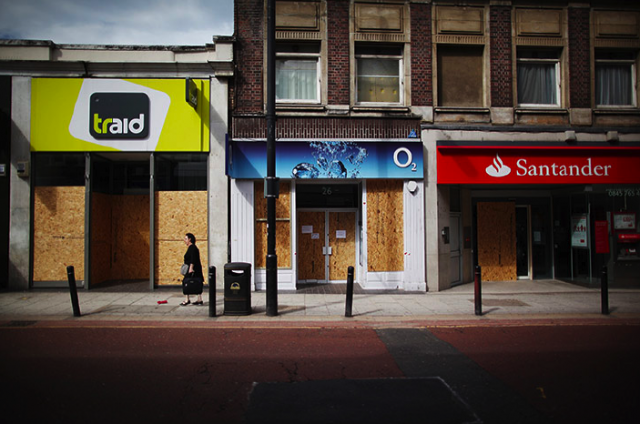 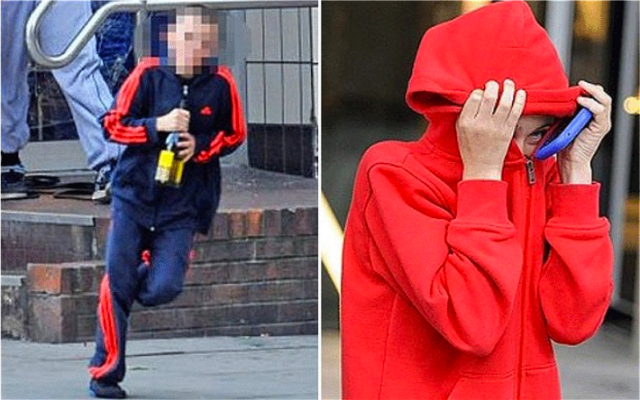 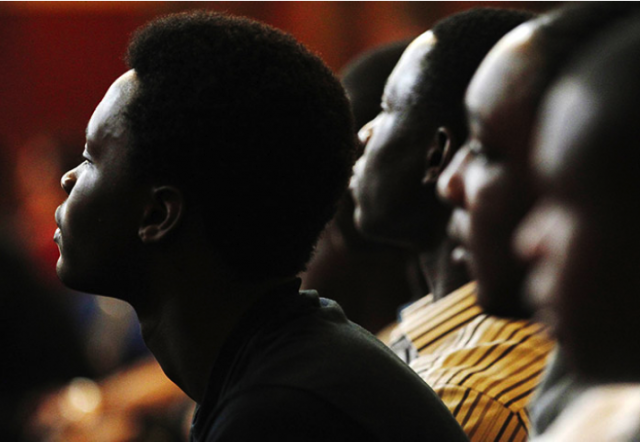 Youths attend the Methodist church vigil ‘not in our name’ in response to riots. (Image: The Guardian)