If one’s first contact with cool—or one’s quick realization that one is probably, most likely uncool—represents the onset of The Teenage Years, then for me it happened one afternoon in 7th grade, the day the girl I’d been in love with since 2nd grade played Violent Femmes on her boombox after school. What was this music? Where did it come from? Wait – what did he just say?!? How did she always seem to know things? Her older sister, surely. The same older sister that gave her a General Public cassette in 2nd grade. But back then, even though I was aware enough to know I had no idea where this music was coming from, I wasn’t really privy to the concept of cool factor. Now, on that Middle School afternoon, a few minutes before soccer practice, hearing “Kiss Off” and “Add It Up” made me feel all kinds of shivery, tingly, nervous feelings I’d never felt.

It was the late 80s. I was marooned in safe, quaint Hudson, Ohio. For most of it, at least. Luckily, I left every summer for Europe—usually France (where my mother was born) and occasionally Greece (where my father was born). At home, my parents only listened to Classical Music and NPR—with the occasional Greek bouzouki record thrown in for good measure. The only Pop records I can remember being around the house were Dylan’s Desire, McCartney Ram and Simon & Garfunkel’s Live in Central Park. Those were my mom’s. Of those, I only ever remember hearing Simon & Garfunkel. I never disliked the classical music we listened to—and that my father loved faux–conducting to in the car, much to my mortified teenage chagrin (secretly, I thought it was hilarious). Appreciation didn’t exactly flow in both directions though. By the time I was 10, I basically lived for the fleeting sugar rush of a Duran Duran or Human League or New Edition song. My father was bewildered by my growing obsession with Pop radio. Teenage–doom (doom?), it seemed, was just rearing its heavily hairsprayed, self–conscious head. 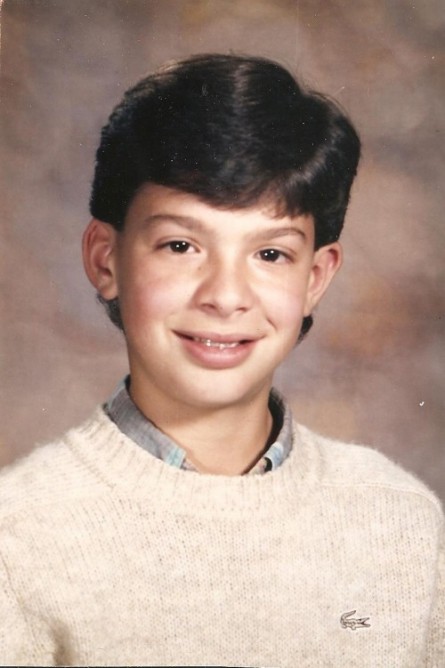 End of The Innocence: A school picture at the end of 8th grade.

At school, I envied all my friends who had older siblings. My only portals to new music were two nerdy friends who I only saw on occasion. One of them was a year older than I. Through his College–aged siblings, he was into Talking Heads and Elvis Costello. At 13, I wasn’t quite ready for such heady fair. I liked INXS. My other nerdy friend—a scrawny son of an Archeology professor who somehow convinced the neighboring college town record store to give him a job at the tender age of 13—was obsessed with bootleg videos and cassettes. Especially if they had anything to do with Pink Floyd or REM. We must’ve watched 100 video bootlegs of REM playing “Pretty Persuasion” in Utrecht or Antwerp or wherever the fuck. This was mostly during the phase when Michael Stipe was dying his tonsure haircut with mustard and the rest of them looked like a flea market version of The Byrds.

Slowly but surely though, through the two of them, I was realizing I didn’t have to acquiesce to Steve Winwood or various hits from the Dirty Dancing soundtrack. (Disclaimer: I appreciate “Higher Love” more now than I did at the time.) There was a world out there that didn’t have anything to do with The Radio. Taking the bus to away soccer games, a few cassettes were in heavy rotation on the Sony Sports Walkman. Bob Marley Legend. (Duh.) REM’s Eponymous. Midnight Oil. The Clash Combat Rock. I was obsessed with The Clash. I’d never heard anything like “Straight To Hell”. Still, I had a hard time resisting the occasional FM hit of sugar. Yes, secretly I did like “Kokomo”—even with John Stamos on board. MTV was basically at its video–showing peak. The video for REM’s “It’s The End of The World (As We Know It)” and INXS’ “Devil Inside” were faves. So was Camper Van Beethoven’s “Pictures of Matchstick Men”. Lest we forget A–ha.

On a summer trip, I had my first week sans parental supervision on a Greek island. Just myself, two cousins and thousands of other potential juvenile delinquents running wild on the beaches and in the clubs. I was 14. I got drunk for the first time. I hooked up with a girl for the first time. We were in a field with tall grass. I don’t remember much about her. I remember the songs more. 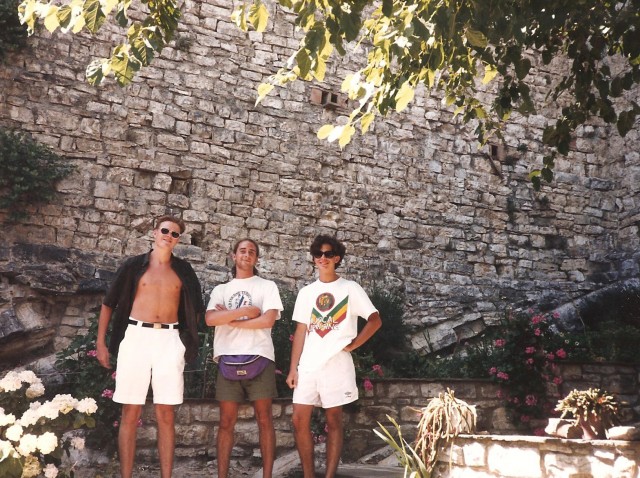 At 15, a summer trip to Tuscany during my "Reggae Soccer" phase (with a Swedish and Canadian traveler I met).

There were two staples at all the discotheques that summer. Two songs that I always waited for: Soul II Soul’s “Back To Life” and The Cure’s “Lullaby”. They must’ve played some extended disco dub of The Cure track or something cause it would go on forever and it was sooooo slow and heavy. Perfect for 3am. I thought dancing was about the best thing ever. I saw the video for Beats International’s “Dub Be Good To Me”. I’d never heard a bassline like that before—so simple, so perfect. It would be another two years till I found out they’d lifted it from “Guns of Brixton”.

Back in Ohio, I turned 16. It was 1991. My nerdy friend with the older siblings started a radio station at my high school. I became a DJ. My hour would play over the commons during Study Hall. Nobody ever requested anything. College Rock, as it was known (the predecessor to “Alternative” music), was in full swing. I remember the CMJ samplers being pretty great. That was when I first heard The Feelies and Robyn Hitchcock. Cocteau Twins and 10,000 Maniacs. Black Uhuru and Gang of Four. The B52s and Echo & The Bunnymen. Haircut 100 and Cowboy Junkies.

I made friends at Brady’s Café—a quasi-legendary college coffee shop linked, and forever identified, with the Kent State University shootings. One of them, Jen, introduced me to The Primitives and Trash Can Sinatras and The Ocean Blue. She made batiks and made me the requisite Cure mixtape. I heard Miles Davis and The Grateful Dead for the first time and smoked clove cigarettes. A day trip to Coventry with another friend named Jen led to a chance purchase of a random 80s Wire tape, A Bell Is A Cup. 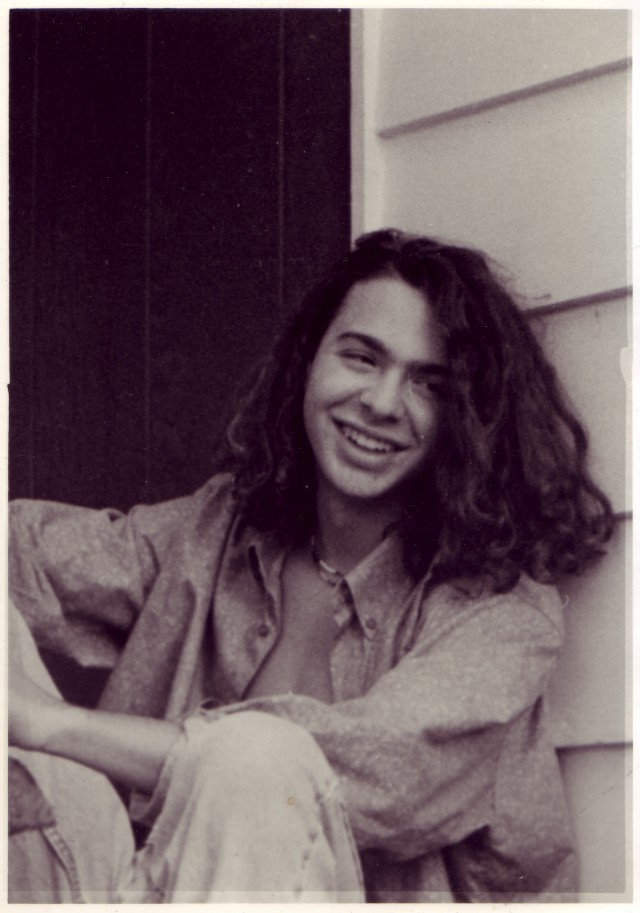 My identity, like my erratic and searching taste in music, was far from fixed. I grew my hair out (Michael Hutchence may have been an influence). Quietly, I resented the idea of having to fit into an archetypal mold. Prep. Punk. Goth. Jock. Hippie. Christian. Nerd. I didn’t have any models. Why couldn’t I be obsessed with The Smiths and also fascinated by the subculture around The Dead? Aside, of course, from the fact that it might not make for the best outfit. Then again …

Senior year, my high school band, The Happy Medium, played Gang of Four’s Damaged Goods and REM’s Boxcars (Carnival of Sorts) and a few “originals” in the school battle of the bands. I pray no recordings remain.

As that last year of high school approached its end, Nirvana and Jane’s Addiction were kings. I thought they were alright but I was more into the Stone Roses and The La’s. I thought striped Hang Ten tees were about the coolest thing on Earth. I discovered NME and Melody Maker. A new Anglophilia was taking hold. Smoking weed was changing things fast. Blur’s Leisure and Ride’s Going Blank Again formed the summer soundtrack preceding freshman year at University. I went to raves. College was on the horizon. A world was finally starting to open up.

Beats International Dub Be Good To Me
Soul II Soul Back To Life
The Cure Lullaby
REM South Central Rain
Billy Bragg She’s Got A New Spell
The La’s Feeling
The Primitives Crash
INXS Never Tear Us Apart
The Smiths This Charming Man (BBC Radio 1 Version)
The Feelies Let’s Go
The Grateful Dead Attics of My Life
The Stone Roses I Am The Resurrection
Ride Taste
Teenage Fanclub December
The Sundays My Finest Hour
10,000 Maniacs Like The Weather
Echo & The Bunnymen Lips Like Sugar
Gang of Four Damaged Goods
Black Uhuru Guess Who’s Coming To Dinner
The Clash Straight To Hell
Primal Scream Slip Inside This House

—Alexis Georgopoulos is a composer & artist living in New York City. He puts out records and makes scores and installations as ARP and also plays in the group The Alps and Q&A. You can see and hear things on his site — studioalexisgeorgopoulos.com