For a generation of Chicano youths in 1940s Los Angeles, zoot suits were pure swagger. The word “zoot” itself was a synonym for flashy borrowed from the smoke filled jazz clubs of Harlem in the 30s, it fit the fashion to a tee. The style quickly spread from black communities in industrial East Coast cities to Mexican-American communities from El Paso to Los Angeles. The Mexican-American kids who decked themselves out in the style called themselves pachucos, and they would inadvertently become symbols of growing unease with race relations and youth “delinquency” in America. 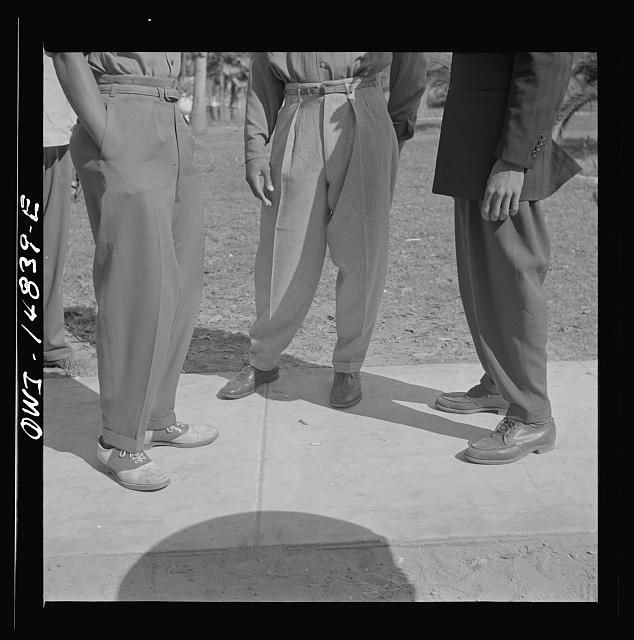 In 1942 the body of José Diaz was discovered by a popular swimming hole (later dubbed “Sleepy Lagoon” by journalists) with signs of blunt head trauma. The story hit the papers riding a wave of xenophobia on the rising tides of war. Over 100,000 Japanese-Americans were in internment camps and Los Angeles was teeming with sailors ready to fight in the Pacific Theater, and people loudly demanded “justice” for the murder. The Los Angeles Sheriff’s office answered that call by pushing into Mexican-American neighborhoods and rounding up over 600 young men with Latino surnames. 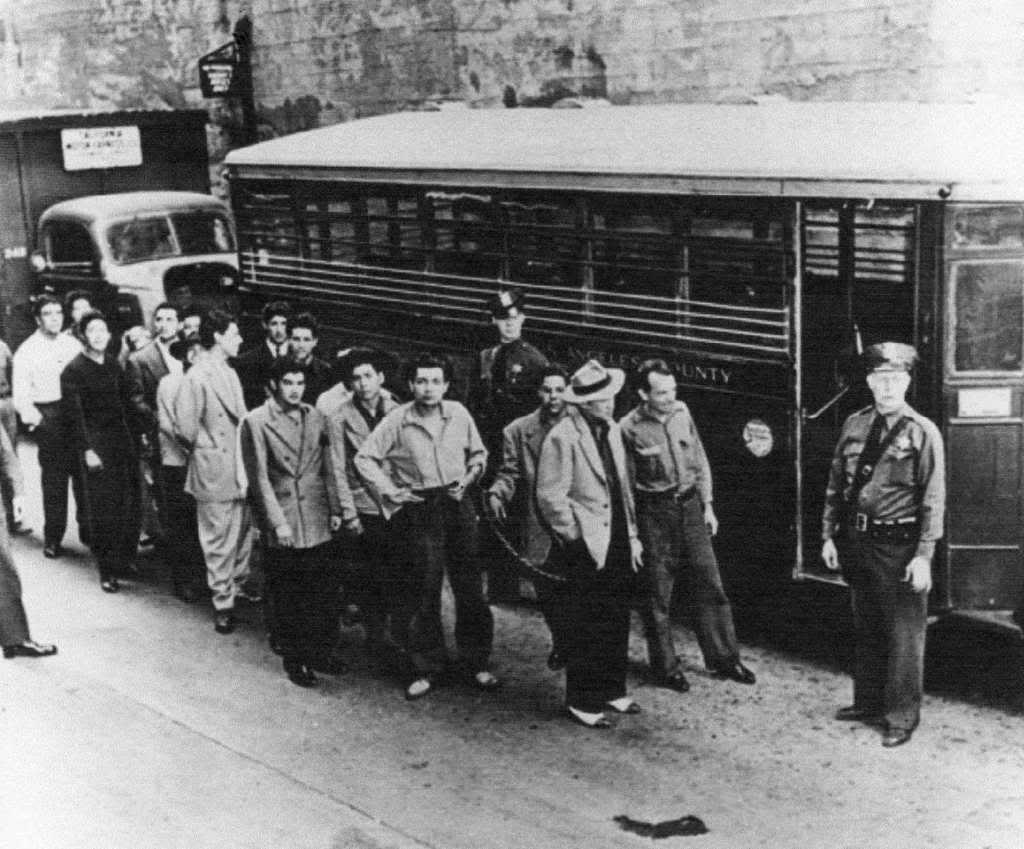 Seventeen were eventually charged for what would become know as the Sleepy Lagoon murder. When they stood trial, Judge Charles Frick ordered them to not change their clothes for the trail so that the jury could see the defendants in their zoot suits. The prosecution called on an “expert” who testified that Mexican-Americans “inherited ‘naturally violent’ tendencies from the Aztecs”; the press ate it up. Twelve of the seventeen were found guilty of murder, despite a coroner’s report indicating that a Diaz’s fatal head trauma came from a car. 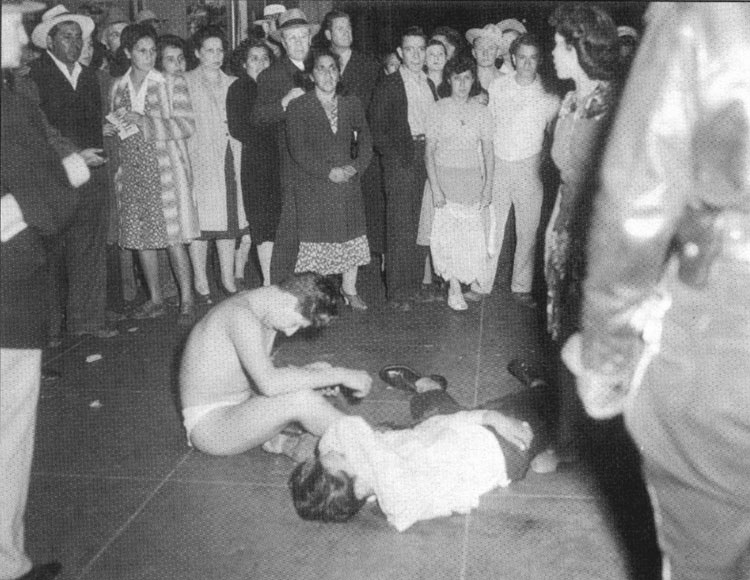 While the mainstream public wrung their hands worrying about the inclement threat of pachuco gangs, a scuffle between sailors and a group of Mexican-American youths sparked what would be the explosion known as the Zoot Suit Riots. To the sailors stationed in LA waiting to ship out to war, the pachucos’ elaborate civilian swagger seemed fly in the face of humble and patriotic wartime rationing. With the fuse lit, a mass of sailors chartered twenty cabs and dove into the heart of Mexican neighborhoods, beating and stripping anyone unlucky enough to be sporting pachuco clothes or hair. Tabloids at the time screamed for more:

…zoot-suits smouldered in the ashes of street bonfires where they had been tossed by grimly methodical tank forces of service men…. The zooters, who earlier in the day had spread boasts that they were organized to ‘kill every cop’ they could find, showed no inclination to try to make good their boasts…. Searching parties of soldiers, sailors and Marines hunted them out and drove them out into the open like bird dogs flushing quail. Procedure was standard: grab a zooter. Take off his pants and frock coat and tear them up or burn them. Trim the ‘Argentine Ducktail’ haircut that goes with the screwy costume.

By the time the navy removed their entire garrison from the city, incidents of terrible violence had occurred on both sides and piles of once slick zoot suits were left smoldering in the streets. The conflagration hurtled zoot suit culture from the poor margins of America’s cities into mainstream American consciousness. Cartoonist Al Capp introduced a villainous (if hapless) character named “Zoot Suit Yokum” to his beloved Lil’ Abner comic strip, contributing to the groundswell of fear that plunged cities across the country into riots similar to LAs. 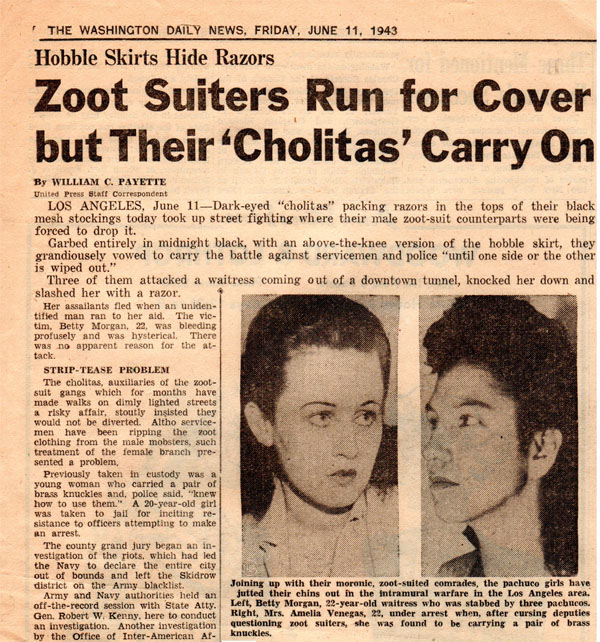 Well after the final embers burned out in LA, the twelve convicted the Sleepy Lagoon murder were freed by an appeals court in 1944. 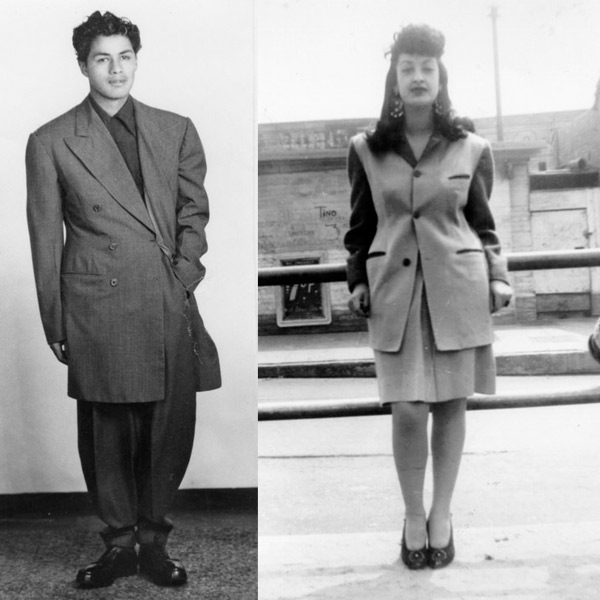 Looking back it’s easy to see why young Mexican-Americans turned towards zoot suit culture as they struggled to define themselves in the shadows of their often poor and conservative parents. Historian Stuart Cosgrove elaborates:

“Delinquency” emerged from the dictionary of new sociology to become an everyday term, as wartime statistics revealed these new patterns of adolescent behaviour. The pachucos of the Los Angeles area were particularly vulnerable to the effects of war. Being neither Mexican nor American, the pachucos, like the black youths with whom they shared the zoot suit style, simply did not fit. In their own terms they were “24-hour orphans”, having rejected the ideologies of their migrant parents.

While ostentatious suits and slicked back duck tail hair-dos have fallen out of style; the cycle of alienation and identity building can be seen in subsequent teen moral panics from hippies to hip hop.

To hear a bit of the brassy big band sound that would have plied the soundtrack for these zoot suiters in the early 40s, here’s an anthemic track from Lalo Guerro called “Los Chucos Suaves”

Special thanks to Dr. Edward Escobar for his guidance in putting this together.

Teenage is playing in LA at the Laemmle NoHo 7 through Thursday March 27th. Get your tickets now.