“The jury deliberated for about ten minutes, during which time Hiliker was in great agitation. When at length they pronounced him guilty, he appeared as if relieved from a torturing suspense, and to assume a degree of fortitude to encounter his fate and which he retained when the sentence of death was pronounced. He is a good-looking youth, only nineteen years old. He is left for execution.” — An English newspaper article, 1803

Thomas Hilliker was a member of the Trowbridge Shearmen (an organized and violent group of wool shearers who were opposed to the introduction of mechanized shearing in Trowbridge, which was the center of wool production for all of England) and was hanged for burning down the Littleton Mill near Semington, just as foundations for wool shearing machinery were being installed. The mill was burned down in a riot, during which Thomas was accused of waving a pistol at a night watchman. He was arrested and charged with arson based on a highly doubtful eyewitness identification… Heath, the owner of the mill (who Hiliker knew and worked for) chose him out of a lineup. Out of all the men in the lineup, Thomas was the only one that Heath had ever seen before.

It is widely believed that Hiliker was innocent. He was hanged on his birthday. 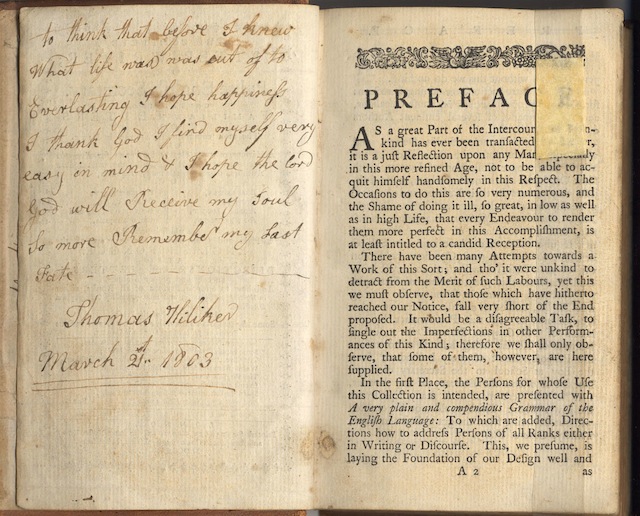 Dear Father and Mother and Brothers and Sister and all my Relations, this is my Last Night. In the middle of the Last night I write this letter. Give my love to my Uncle George — and all the Best of his family and dear Father. I think some have been the Ruin of my Body, but I hope the Lord will save my soul and that they will put up a tomb stone at my grave — to be a warning to All young men. To be a warning against bad Advice, which has been my fate. And for my Brothers to be good to you both, for it as a Bad thing to forget you. When you read this I hope my soul will be At Rest for ever and ever. Remembered me to Mrs. Baily and Mr. Townsend and W Flicker. Dear Father and mother, this give my Brothers Joseph and think of me when he swears and I hope in God it may Do good to him to leave of fear — well for ever and ever yours, Thomas Hiliker – – – – – – – – – – – – – – – –

I have added punctuation to the transcript of Hiliker’s letter, for the sake of readability. All capitalizations are his.