So, this post is coming quite late in the month but I am sorry. As a real live junior in high school I have been dealing with crazy amounts of work that just makes me want to curl up into the fetal position with a log of cookie dough and read Edith Wharton…hmmm that’s just me? Alright. So I’ve been thinking a lot about what 2011 was like. And in truth it was kind of a rad year from OWS to OFWGKTA. But personally I am so done with 2011, onward and upward into 2012! Every year my family writes our wishes for the New Year on cards and hangs them on our Christmas tree. This year I wished for “Sparkles and Understanding”. In that spirit, I present some of my favorite tidbits of art and culture from 2011.

+ On Parks and Recreation Leslie Knope continues to be an amazing role model for all sugar high workaholics and proves that women can have a personal life and a collection of all the flags of the world.

+ Vivian Girls’ Share the Joy kicked so much ass, its like a pissed off ’60s girl group record but with lots of tattoos.

+ Wild Flag’s debut album, confirms my belief that Portland is the greatest city in the world and that Carrie Brownstein is its’ queen, if you want to feel better about the universe and growing up and life watch this:

+ the Riot Grrrl archive at NYU, you have to make an appointment but they are super cool to see up close and make you want to create and share anything and everything because what you have to say needs to be said.

+ SlutWalk phenomenon takes over the globe, revignorating smart, sexy feminists everywhere to get up and get angry, and is just one of the kick ass grass roots movements changing the world  movements like Occupy Wall Street and the actions of the women of Saudi Arabia all inspire me to do something to make the world just a little bit better

+ Dowton Abbey makes me wish I was a stodegy, repressed and well dressed member of the aristocracy during World War 1.

+ Seeing the Arctic Monkeys live for the 6th time,  Suck it and See proves that Alex Turner is a lyrical genius and that the band is just as rowdy and fun as ever.

+ Young people in music scenes all over the world, more and more young people are making music for themselves and releasing it themselves, there are so many great teenage/young bands in Brooklyn/New York right now its terrifying. Right now I am super psyched about The Indecent, Fly Baby and Shady Hawkins.

+ Smart cool girls sharing their passion and excitement with others through their blogs like audiophile Eloise Hess, Tavi Gevinson, Jane Aldridge, and Emma Orlow 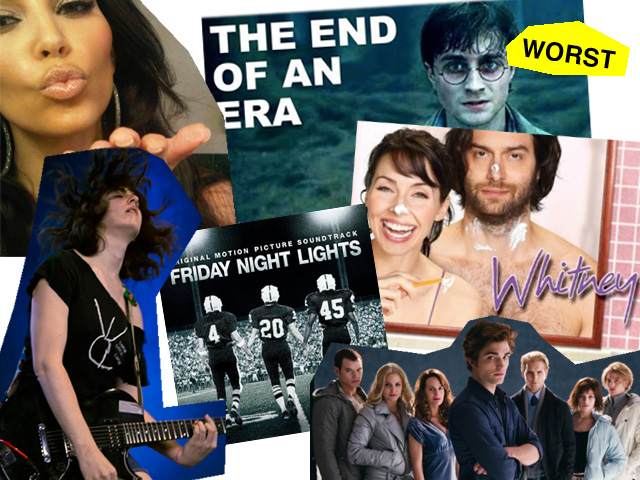 – The best show about teenagers ever—Friday Night Lights ends, and if you have not already seen it, go out and rent all the seasons because it is the most realistic and powerful portrayal of teenagers I’ve ever seen, (FYI I hate sports so you really don’t have to know or care about football to like the show). Soon I will write a post about how all TV meant for teenagers is ridiculous and either sexes us up a la Gossip Girl or assumes that we are all idiots in need of a spanking, but that is besides that point. Friday Night Lights! Watch it!

– Maybe it’s just me but, after Bridesmaids I kinda felt like there was a moment there when TV and movies for and by women would become the norm but for every two steps forward there is Whitney.

– Harry Potter ended! For legions of young folks it was almost as hard as the news of Kim and Thurston’s divorce. But that I mean, all great things come to an end, even for wizards and rockstars.

– Amy Klein left Titus Andronicus, but they were definitely the best show I saw all year so really it’s a double edged sword.