SEX ED
PBS is now streaming an incredible documentary, The Education of Shelby Knox. A self-described “good, Southern Baptist girl,” Shelby Knox is up against the worst as she fights to get comprehensive sexual education taught in Lubbock, Texas high schools. Lubbock holds the highest teen pregnancy rate in America, along with shockingly high STD rates. The school district, filled with Conservative Christians, has no interest in making changes and they do their best to quiet Shelby. Watch Shelby’s political and social beliefs evolve as she perseveres in an uphill battle supporting the “the underdogs”.

The Education of Shelby Knox is available to watch online until April 30. 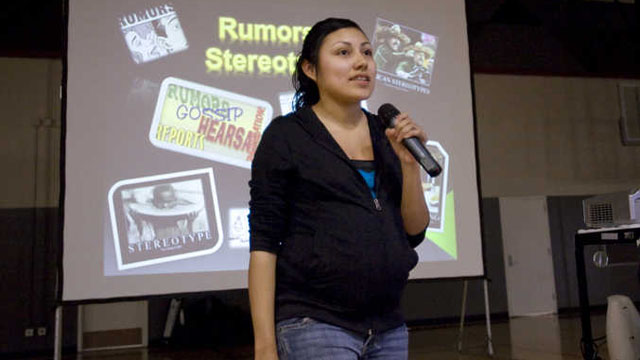 FAUX PREG
Gaby Rodriguez, 17 wore a prosthetic baby bump for six months in an effort to uncover the negative stereotypes about pregnant high schoolers in the age of MTV’s Teen Mom. Only a handful of people knew about her epic experiment…her mother, boyfriend, and principal. During a crowded high school assembly she asked her classmates to read aloud quotes on 3×5 cards, which were actually gossip concerning Gaby—

Her best friend, Saida Cortes, a 17-year-old senior who was sitting in the front row, read card No. 3: “Her attitude is changing, and it might be because of the baby or she was always this annoying and I never realized it.”

It grew quiet in the gym as more and more quotes were read aloud. Then Gaby dropped her bomb: “I’m fighting against those stereotypes and rumors because the reality is I’m not pregnant.”

via Daily Beast and Jezebel