We’re obsessed with Matt Ebert’s Super 8 parody of teenage AIDS activist Marta. Teenage Director Matt Wolf (who you may recall was a gay poster child) interviews Ebert about Marta and laughing
at yourself.

MATT WOLF: When did you make Marta: Portrait of a Teen Activist? What was going on in your life and the world?

MATT EBERT: 1990 January, during a trip with ACT UP NY to demo against the Center for Disease Control and Georgia’s sodomy laws, which were extreme. We stormed the capital and put bloody handprints on the CDC, and in 3 days I made Marta.

Many of my friends were dead or dying. It was a horrible time, coming into my sexual peek at the same time as this sexual scourge is killing everyone. It was shit. And I had to use a lot of drugs to get over it. That’s what I truly believed from 1985-1995. Marta was made right in the middle of that period. It was pretty dark. When people see Marta today, they’ve actually asked me how I superimposed Marta into all that melee. There was no room for error. And it was completely different than today.

WOLF: Who is Marta?

EBERT: Marta is everybody who can relate to her doubt, confusion, courage, fashion sense, and civil disobedient savvy.

WOLF: Are you Marta? I know I’m Marta, for sure.

EBERT: That’s a bonus. The world would be a better place if there were more Martas and less Log Cabin Republicans. There’s a little bit of me in every character I create, so yes.

WOLF: The thing that’s so awesome about ACT UP and lots of AIDS activism from the 1980s and 90s is the humor. How did others in ACT UP respond to the film?

EBERT: Mixed among the women, but the night we premiered it people flipped out. It stands as the best premiere of my life. We had to play it like 5 times because the room kept filling up, and then a new crowd would come and see it, on and on all night. And they just ate it up. Like all the tension AIDS caused was now being spoofed. The mirror has two faces, people were able to see themselves and laugh. Bathos and Pathos, in perfect combination. It was needed because the tension of the movement was a powder keg. Laughter is the best medicine, and as there was no real medicine, laughter proved to be it.

WOLF: Do you think it’s important for activists to have a sense of humor, and to be able to make fun of themselves?

EBERT: It’s important for everyone to be able to laugh at themselves.

WOLF: What would Marta say about all the gay teenagers on TV today?

EBERT: She’s a Glee addict. Just try and get her iTunes account in order.

WOLF: What would Marta do to stand up against the gay teen bullies?

EBERT: The same thing I did, kick ass. Seriously, she would stand up. Or make a movie about it. 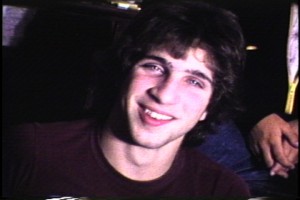 —Filmmaker Matt Ebert in 1982, a junior in high school.