Writings on the walls in Rome is nothing new. Like every other big city, graffiti (of all kinds) has always been a constant presence in the eternal town. Something quite peculiar about Rome though, is the massive presence of “teenage love graffiti” all over the place.

While the act itself is a classic teenage “thing to do,” recently writing love declarations on walls and streets has become the rule, the normal and right thing to do to show your affection to your girlfriend. Usually, the sloppier the writing, the bolder and braver they are. Imagine a sixteen-year-old kid, who has never before touched a spray-can, writing things he considers “romantic” on the walls of his girlfriend’s building, and multiply that for a few thousand units. Now you get the idea. 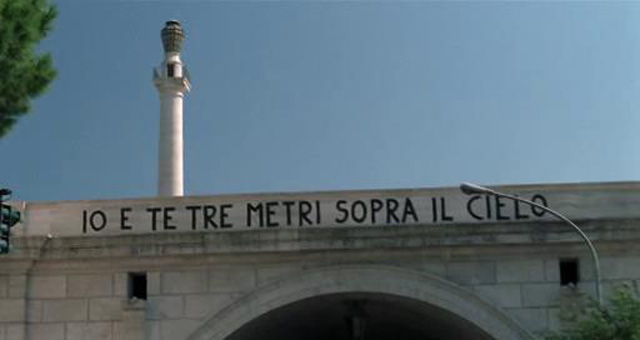 What’s even worse–or better, depending on how you see it–is that this trend was started by one of the most obnoxious Italian book-turned-movies of the past 10 years, Tre metri sopra il cielo, an incredibly banal and successful romance story between a bad boy and a posh girl who falls for him. In the movie, Step, the bad boy writes a dedication on the side of a famous bridge in Roma Nord to his girlfriend Babi, the day after she loses her virginity to him: Me and You, three meters above the sky. Since then, no Roman street is safe from teenage love eruptions.

Here are a few I found walking through my parents’ neighborhood, a rather quiet and residential area not far from the center. 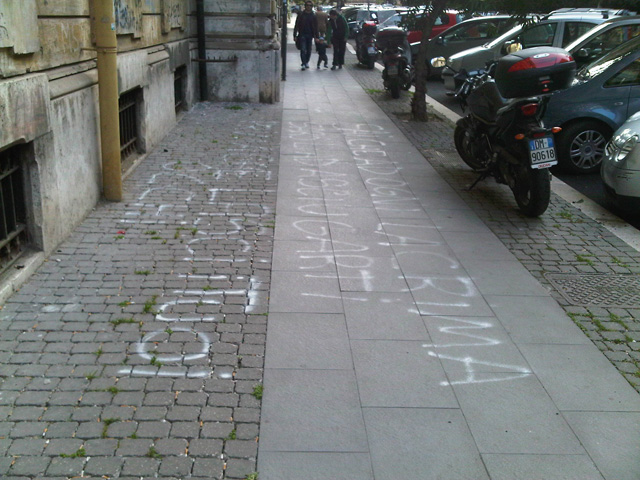 This one was clearly made under the girl’s window and says “Sai che ad ogni lacrima sarò lì ad asciugarti prima che lasci i tuoi occhi” or, “You know that for every tear, i’ll be there to dry it before it even leaves your eye.” 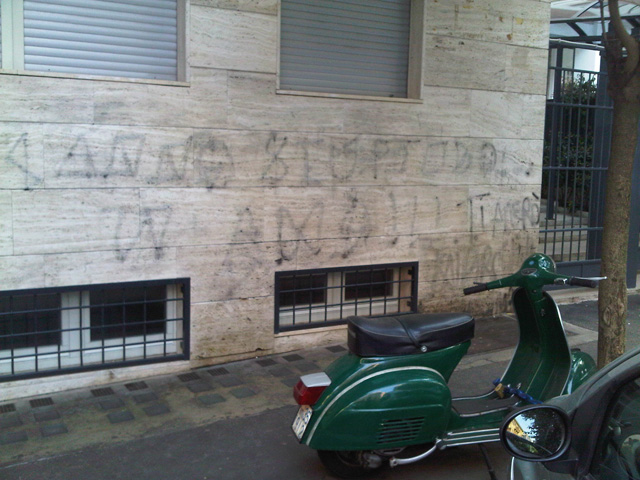 Something went wrong with this one, first crossed and then deleted. It says “1 amazing Year. I love you.” Simple and direct. 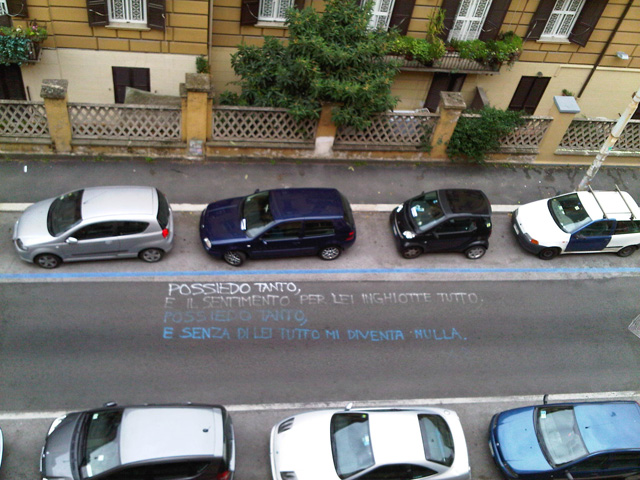 This one is actually dedicated to my sister, and that’s when I realized shit was out of control. Apparently it is from Goethe and says “I got many things, but the feeling for her swallows all of them. I got everything, but without her, everything becomes nothing.” This sounds more like an Usher song than Goethe, but i’m too lazy to find the real English version. Anyway, i think you got the message. Saluti da Roma.

Lorenzo Mapelli is the author of Sexy People. Born and raised in Rome, he now lives in Milan, where he works as online editor for VICE Italia. When Lorenzo was a teenager he smoked joints and listened to rap music, which he still does in a way.